It is the season of writing game of the past year lists and hyping the games of the new one. I’m delighted to see how Telltale’s The Walking Dead haunts most of these “best of 2012” lists. Its success proves that adventure games still have a lot to say about game design and game narrative, and that there can be a wide audience for them. It also proves how choice design changes how we play and design adventure games. 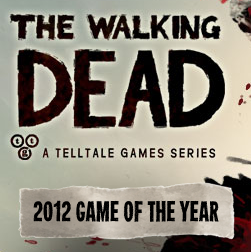 ms the potential of choice design in adventure games, something that my friends at Choice of Games had already been doing for a while. The core gameplay is making decisions, usually quickly, and living with the consequences (or dying horribly). Although many scenes change depending on your previous actions, because otherwise the choice would be superfluous, the game does not degenerate into out-of-control branching. Instead, it changes specific aspects and scenes of the story. Designing this game must have still been rather complex, which is what happens whenever we have to set up a choice and a clear narrative consequence, but it is done in such a way that choices create a hyper-tangled rhizome.

What I have not seen mentioned often enough in reviews how different The Walking Dead is from other Telltale games, as well as from many other point-and-click adventure games. This may come from the misconception that adventure games are the electronic version of Choose Your Own Adventure books, so it may seem that this is more of the same.It’s not.

Adventure games are simulations. This is obvious to anyone who’s written IF with Inform, or created games with Adventure Game Studio, for example, but it’s a concept that finds resistance from people who only play them, and usually without much enthusiasm. Zork, Maniac Mansion, Machinarium are all based on creating a world, a space, populated by characters and objects, which have different relationships between them. The simulation creates challenges usually in the form of puzzles, and the player has to solve it by understanding how the simulation works. The story unfolds as the player interacts with the world and solves the puzzles.

The Choice of Games series, as well as The Walking Dead, shift the attention to choice and consequence. This is obvious in the Choice Of… games, where the world of the game is described, and our only interaction is selecting items from a menu. We don’t interact with a simulated world, but with a world represented through text. The Walking Dead is a nice hybrid between traditional point-and-click and choose your own adventure, where some scenes allow us to walk around and explore the world at our leisure, to learn about the place and gather information, which will inform our decisions later. There’s less puzzle-solving, the core of the game is choosing the right thing in the moments of crisis. Best thing of all, what the “right” thing to do is never clear, and often makes you feel like you’re trapped in an awful situation.

As someone who designs adventure games focused on simulation and puzzle solving, I really welcome games like Choice of Zombies or The Walking Dead. It’s refreshing, it proves that there is still so much to do in adventure games beyond paying constant homages to our favourite games from Lucasarts or Sierra (I’m guilty of that too). There is a wide design palette at our disposal, we just have to use it.

The Walking Dead and Choice of Zombies also fit choice design with their topic very well. It makes sense that we cannot go many places, that there is not a lot to explore: it’s the zombie apocalypse! Plus you’d better be careful with what you do, because any choice could be your last. The limitations in the environment bridge very well the world of the game and the game design.

Choice design is not new, RPGs have explored this for a long time, with varying success. Think of all these games series: Fallout, Knights of the Old Republic, Fable, Dragon Age… Often choices in RPGs are limited to “save the baby or kill it” pseudomorality, where the consequences are relatively predictable. Some of the examples just listed demonstrate how much more interesting choices become when your expectations are thwarted, or, better enough, where there is no easy choice, which is what probably is impressive about The Walking Dead.

Choice is not alien to adventure games either–Infocom’s Suspended depends on your strategies to try to save the world before you are disconnected, for example. Point-and-click adventure games included important choices, usually at the end, because it’s easier to generate three different endings than start working on different outcomes all throughout the game (see The Dig, or Gabriel Knight: Sins of the Fathers, for example). More recently, Resonance did a wonderful job of incorporating choices. (It’s hard to talk about it without spoiling it, but I’ll try.) Resonance also has multiple endings, but does have choice points throughout the game that feel really important, and even if the consequences of the choice are not so different (or inevitable, when it comes to the twist of the game), the game makes you stop and think about what you’re doing. This is mostly achieved by getting you to know the characters and empathise with them, you spend time with them, and when the crisis comes about, you feel for the characters, you feel the pain and the betrayal. The consequences are emotional rather than changing the events. Resonance does in practice what the publicity of Heavy Rain kept announcing, and the game eventually failed to deliver. 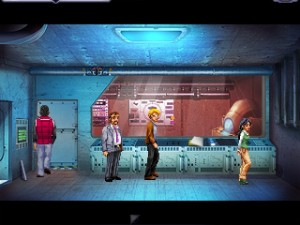 The Walking Dead combines plot consequences with emotional consequences very cleverly: early on, you see how your decisions can have awful consequences, people die if you don’t act fast enough or do not make the right choice. Later on, the consequences become more emotional than changing the events. Unlike the adventure games listed in the paragraph above, where it’s a final choice that changes the ending, The Walking Dead takes you to an inevitable ending with slight variations, which may feel different depending on how you have chosen to play your character. That’s eventually the triumph of the game: choice design is about the psychology of the player, not about showing off a complex system.

The possibilites of new adventure games are wide open, it’s our choice. Those who said that adventure games were dead didn’t expect them to come back shuffling their feet and try to rip their gut open.